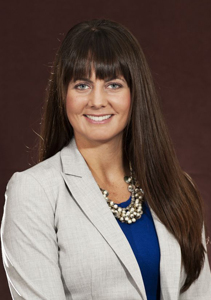 Alanna M. Fairrell is experienced in several areas of the law and is able to help clients with many different legal issues.

Alanna also practices in the area of employment law, including wrongful termination, discrimination and sexual harassment.    She practices landlord-tenant law and has represented both landlords and tenants in lease disputes.  Alanna also provides legal counsel to property owners’ associations, and can help POAs effectively manage their entity.

Alanna can also handle your personal injury case, whether you’ve been injured in an automobile accident, or whether you’ve suffered injuries from another type of accident.

Alanna represents clients in appeals before the Arkansas Court of Appeals and Supreme Court of Arkansas, and has been successful in multiple appeals she has argued.

Monday-Friday:
8am – 5pm
© 2020 Snively, Fairrell & Koehler Law Firm All Rights Reserved. Disclaimer: All information in this website is not legal advice, is not intended to be legal advice and is for informational purposes in order to help you in your decision to hire an attorney only.